The 2019-20 bushfires had a devastating impact on native animals, plants and large areas of habitat in Victoria. In these conditions, invasive species are a significant threat to the survival and recovery of native plants and animals.

Under the Victorian Government’s $54.5 million investment into the Bushfire Biodiversity Response and Recovery program, $25 million has been allocated to the theme ‘Intensified and sustained management of threats’, which addresses the threat of invasive species after the 2019-20 bushfires. This is complemented by $6.2 million funding under the Australian Government's Regional fund for wildlife and habitat bushfire recovery.

This threat management program aims to reduce the impact of introduced animals and weeds on the survival and recovery of threatened native plants and animals and important habitat in fire-affected areas of Victoria.

This program is strategic, collaborative and large-scale, and complementary to other invasive species programs across Victoria. It is led by the Department of Environment, Land, Water and Planning (DELWP) and delivered by DELWP, Parks Victoria, Traditional Owners, the East Gippsland Catchment Management Authority and Trust for Nature, in collaboration with others.

Pest predators are being targeted through ground shooting, aerial shooting and baiting programs across the fire-affected areas.

Introduced large herbivores, such as deer and feral goats, can quickly move into new areas after a fire and seriously damage native vegetation and important habitat areas. Large herbivores compete with native animals for food and habitat, prevent successful regrowth of native plants after fire and spread weeds.

There are several significant vegetation communities within the fire impact areas, including rainforest and alpine peatlands, that are particularly sensitive to fire. As well as being directly impacted by the fires, these vegetation communities are also at high risk from grazing and trampling by introduced large herbivores.

The abundance and distribution of introduced large herbivores are being reduced through aerial shooting, ground shooting, baiting and trapping programs across the fire-affected areas.

While fire can be beneficial to the regeneration and germination of native plants, it also increases the risk of weed infestation. Weeds thrive in disturbed landscapes and are very good at moving into burnt or cleared areas.

The risk of weed invasion dramatically increases after fires, leading to new or more severe infestations of weeds and reducing the ability of native plants and habitats to recover.

Weed control after a fire is important to prevent weeds from regrowing and spreading and help native plants and vegetation communities to recover.

Weed control is being delivered across the fire-affected areas, focusing on weeds at the early stage of invasion and high-threat weeds. 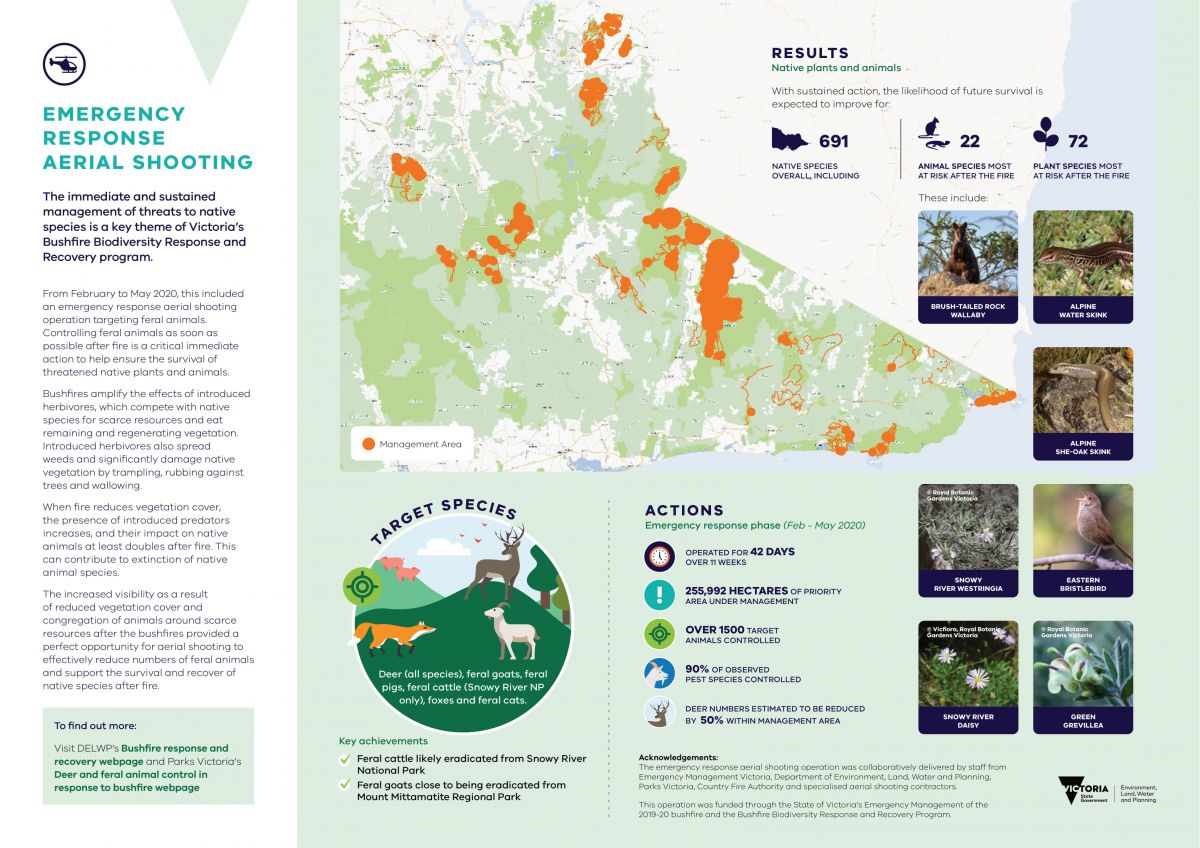 A report has been produced on the outcomes of the emergency response phase of the aerial shooting operation. This report summarises the operation’s delivery structure, results, effectiveness and benefit to biodiversity.

Aerial shooting has continued as part of the Bushfire Biodiversity Response and Recovery program from June 2020 to June 2022 under the lead of Parks Victoria. The aim of these operations was to reduce the abundance of target animals, particularly deer, in high biodiversity value, bushfire-affected areas. Reducing target animal abundance will increase the chance of survival for some of our most threatened species and ecosystems, such as the Alpine She-oak Skink, Green Grevillea, alpine sphagnum bogs and littoral rainforests.

Aerial shooting is a highly efficient and effective feral animal control method, particularly post-fire where ground access may be limited, and in remote areas that are difficult to access on ground. Aerial shooting is being complemented by on-ground shooting, baiting and trapping activities.

The Arthur Rylah Institute has analysed data from aerial shooting operations in eastern Victoria between February 2020 and May 2021 to determine the effectiveness of aerial control of deer.

Data from three periods (Feb-May 2020, June-Oct 2020, Feb-May 2021) of aerial shooting across ten operational areas (as shown in the map) were analysed using catch-effort models to estimate the reduction in Sambar deer abundance. The analysis is also helping to inform decisions on the amount of control required in future to reduce deer numbers in operational areas. The confidence in the results was determined by how hard it was to detect deer from the aircraft and how much time was spent searching the area. Deer were harder to detect in some areas especially where the initial abundance of deer was low. Coopracambra National Park has a very low level of confidence due to its very low number of deer and little time spent searching the area, making the results less certain.

These results will inform the planning and delivery of future aerial shooting operations in Victoria. This includes guiding the optimal timing, frequency and intensity of control to achieve target densities in high biodiversity value areas.

A final report will be published in 2023 and will present data and information on overall effectiveness of the bushfire recovery aerial shooting operation to June 2022.

The aerial shooting program is transitioning in 2022/23 from a bushfire recovery activity under the Bushfire Biodiversity Response and Recovery Program to an ongoing control method delivered under other biodiversity programs, including the Victorian Deer Control Program. Continuing to deliver and improve aerial shooting operations will ensure that localised reductions in deer numbers are maintained and that effective, long-lasting biodiversity outcomes are achieved.