This elusive bird lives on the northern grassland plains of Victoria. Despite its quail-like appearance, these birds are surprisingly distinct from any other species on the planet, they are the last family on their evolutionary line.

Unlike most birds, the Plains-wanderer females (pictured) are more brightly coloured than males and lead courting activity by establishing a breeding territory and calling for males across the grasslands at dawn when habitat conditions are favourable for mating. When they rendezvous amongst the grass thickets, the girls impress the boys with their black and white spotted collar and rusty red plumage. Once the females lay eggs, they leave the parenting to the males and meander off into the night calling and searching for a new mate. 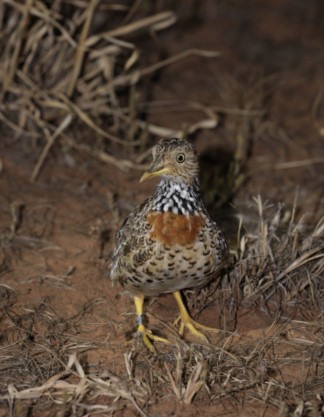 Much of the Plains-wanderer's range overlaps with land used for agricultural practices such as cropping and grazing, and so they are at risk of habitat loss. Habitat management is a critical element of the Plains-wanderer recovery effort.  To thrive, the fussy Plains-wanderers require a specific mix of herbs, forbs and grasses (however not too much grass growth and not too little). Other threats include flooding, feral predators, pesticide use and their small population size.

Government, non-government and private landholders are working together to create suitable habitat and increase the populations of birds through captive breeding program.

There are many partners involved in the conservation efforts to protect the Plains-wanderer, they include the Department of Environment, Land, Water and Planning (DELWP), Parks Victoria, Trust for Nature, Zoos Victoria, North Central Catchment Management Authority, universities and private landholders.  These groups are represented in the Victoria Plains-wanderer Operations group, and are co-ordinating efforts across the many projects and activities as part of the Victorian contribution to the implementation of the national recovery plan for the species.

Efforts to save the species are being supported by a $200,000 grant through the Victorian Government’s Biodiversity On-Ground Action Icon Species Grants program.  This funding is used to identify suitable and occupied habitat across the Northern Plains, using song meters to record breeding female Plains-wanderers’ calls. Sixty song meters have been established across public and private land throughout the Patho and Lower Avoca Plains in northern Victoria. This allows us to search for these elusive birds with minimal disturbance.

A further $1.6 million over three years is being provided to Parks Victoria and Trust for Nature through the Victorian Government's Biodiversity Response Planning, to manage threats such as boxthorn, rabbits and foxes as well as biomass (grass cover) management to improve habitat condition.

As part of conserving the species and increasing the number of birds in the wild, a tri-state (Victoria, NSW and South Australia) captive breeding program for Plains-wanderers has commenced. Zoos Victoria facilities built in 2017 at Werribee Open Range Zoo provided opportunity to refine animal husbandry practices. The first eight birds joined the program in 2018. Since then a total of 13 chicks have hatched.

Conserving Victoria's threatened species requires a collaborative approach. There are a number of organisations working to help with recovery efforts for the Plains-wanderer. These include:

National Recovery Plan for the Plains-wanderer