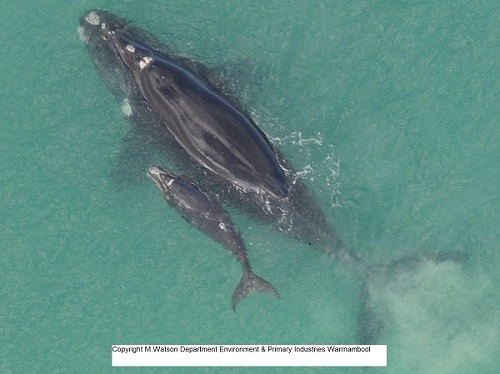 The Southern Right Whale is a large baleen whale that can grow to 18 m in length and weigh up to 80 tonnes. Its skin is black, occasionally grey or with white patches on the belly and it is the only large whale that lacks a dorsal fin. The Southern Right Whale has one of the largest heads of all whale species, measuring up to one-third its body length, and it has a highly arched mouth. The Southern Right Whale is also distinguished by the roughened skin patches on the head, known as callosities, which become colonised by tiny white crustaceans called cyamids. These features are important as they allow scientists to tell individual whales apart.

The Southern Right Whale is a migratory species which spends the warmer months in  the sub-antarctic oceans and the cooler months along the southern coastline of Australia where females come to give birth and nurse their young.

Efforts to save the species are being supported by a $48,000 grant through the Victorian Government’s Biodiversity On-Ground Action Icon Species Grants program, which funds targeted actions designed to protect and conserve Victoria’s threatened species.

This funding is going towards a study to investigate threat mitigation tools and develop recommendations for a range of actions to support the recovery of the Endangered Southern Right Whale in in Victoria such as:

Whale watching guidelines have been incorporated into the Victorian Wildlife (Marine Mammals) Regulations 2019 to provide for long-term protection of whales by prescribing minimum approach distances to whales, prohibiting or regulating activities in the vicinity of whales and prescribing conditions and setting fees for whale watching tour permits.

The Logans Beach Exclusion Zone is a defined offshore area near Warrnambool, closed to powered vessels each year to protect females and their nursing calves during the Southern Right Whale breeding season . The area is listed as an Exclusion Zone under the Wildlife Act 1975.