In the wild, they are restricted to a tiny population (minimum 49) in the Little River Gorge in the Snowy River National Park in East Gippsland and to an even smaller reintroduced population (about 5) in the Grampians National Park.

They live in family groups comprising a dominant male and several related females and their offspring. The females usually produce one young per year and males generally disperse from the group when they mature.

Rock-wallabies browse on shrubs, forbs and grasses close to areas of complex cliff and rock jumbles where they shelter and take refuge from predators.

Southern Brush-tailed Rock-wallabies have suffered wide-spread decline in Victoria due to being hunted for fur in the 19th and 20th centuries, introduced predators across their range, habitat loss and reduced genetic diversity from small population size. Genetic decline from small population size and inbreeding requires a genetic rescue program with mixing of captive bred animals with the wild population - results will take many breeding generations to be observed.

Monitoring and controlling predators that affect the southern Brush-tailed Rock-wallaby is very difficult as the country is steep, rocky, remote and difficult to access.

Efforts to recover the species are being supported by a $200,000 grant through the Victorian Government’s Biodiversity On-Ground Action Icon Species (BOA) grants program and partially from a $450,000  Biodiversity Response Planning (BRP) grant for threatened species recovery in Victoria’s Upper Snowy River. These funds target actions designed to protect and conserve Victoria’s threatened species.

The BOA funds are being used to support the southern Brush-tailed Rock-wallaby captive breeding and release programs at Tidbinbilla Nature Reserve and Mt Rothwell Biodiversity Interpretation Centre. The aim of captive breeding is to build independent groups of animals as insurance populations and then to select suitable animals for release in to the wild populations. The BOA funding has also enabled removal of a small number of suitable wild animals from East Gippsland to supplement genetics of the captive populations.

The BRP funds are ensuring the East Gippsland population has adequate predator control through delivery of a comprehensive program on public and adjoining private land. These funds are also being used to conduct targeted monitoring to identify priority release sites and the translocation of captive bred animals with improved genetics in to these sites.

Over the next 5 years Zoos Victoria, through their "Fighting Extinction" program, are investing in actions to support genetic rescue and the establishment of a new wild population.

Conserving Victoria's threatened species takes a collaborative approach. There are a number of organisations working to help with the protection and recovery of Brush-tailed Rock-wallabies. These include: 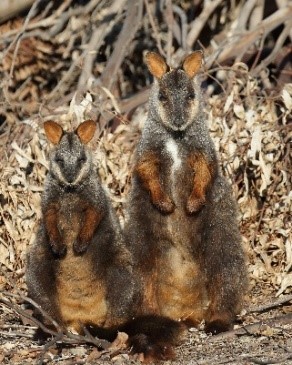 June 2019
Brush-tailed Rock-wallaby back from the brink

July 2017
Rockies on the road to recovery

The number of Southern Brush-tailed Rock-wallabies in the wild is continuing to bounce back thanks to two decades of work to protect them.