Eastern Barred Bandicoots rest in a shallow, grass lined nest during the day and come out to forage at night on a variety of invertebrates, such as worms, grubs and beetles. They are solitary animals and have a short gestation period, with young born after just 12 days of pregnancy.

Eastern Barred Bandicoots were once widespread across the grasslands and grassy woodlands of western Victoria, extending into the south-east corner of South Australia. 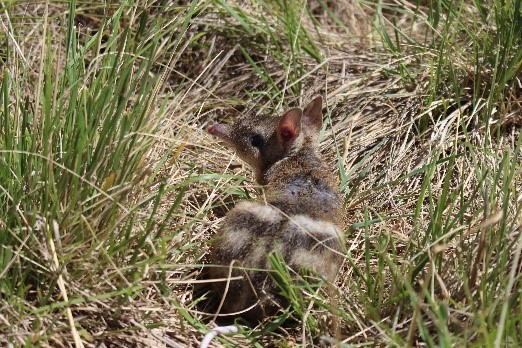 Loss of their grassland habitat and predation by cats and foxes has led to the decline of this species.

All animals are now descended from a small group of animals removed from the wild in the late 1980s. To combat low genetic diversity within this population, gene pool mixing with Tasmanian animals has been trialled at Mount Rothwell Biodiversity Interpretation Centre. A successful captive breeding program has allowed new, reintroduced populations to be established and secured in three fenced, feral predator free sites (Mt Rothwell, Woodlands and Hamilton) within their original range, totalling about 805 ha. Total population size in these three sites can exceed well over 1000 animals in good conditions. A fourth almost 1000 ha site near Mortlake is currently being prepared.

There has been a strong volunteer effort to carry out work on these properties, run by Conservation Volunteers Australia and Mount Rothwell Biodiversity Interpretation Centre. Introduced island populations have also been established on Churchill and Phillip Island in Westernport Bay. A new population will shortly be established on French Island.

Efforts to save the species are being supported by a $200,000 grant through the Victorian Government’s Biodiversity On-Ground Action Icon Species Grants program, which funds targeted actions designed to protect and conserve Victoria’s threatened species. The project also receives substantial support from the National Landcare Program, Zoos Victoria, and private philanthropy. This funding is going towards supporting the management of four reintroduction sites including predator fences, control of feral animals and weed control.

In 2021 extra funding was received for the essential maintenance of predator fences, control of feral animals and environmental weeds. The funds will be used for repairs and maintenance of predator-proof fences at reintroduction sites, purchase of cage traps which are used twice-yearly to assess total population sizes, track maintenance to allow for essential twice weekly fence patrols and tree pruning along fence boundaries to remove the risk of branches falling onto and damaging predator fences.

Conserving Victoria's threatened species takes a collaborative approach. There are a number of organisations working to help with recovery efforts for the Eastern Barred Bandicoot. These include:

Wildlife experts have been monitoring Eastern Barred Bandicoots at Hamilton this week to estimate the population of the endangered species, which