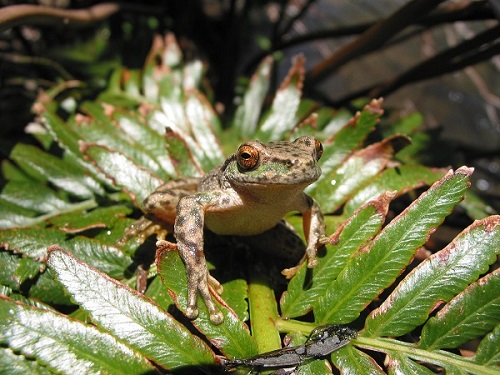 The nationally endangered Spotted Tree Frog Litoria spenceri is a medium-sized species which inhabits remote mountainous river systems in Victoria and New South Wales.  Female frogs are slightly larger than males reaching a length of approximately 60mm and are variably patterned with olive-grey and green markings. The species is generally well camouflaged amongst the lush streamside vegetation and rocky substrate of mountain streams where it basks and forages during the warmer months of the year. Eggs are deposited under large instream boulders, and tadpole development occurs within the stream.

Where are they found?

Only 12 populations have been located in Victoria; these occur predominantly to the north-western side of the Great Dividing Range, between the Central Highlands of Victoria and Mt Kosciusko in NSW. Spotted Tree Frog inhabit naturally vegetated, rocky, swift-flowing upland streams in dissected mountainous country, between 280 and 1110 metres above sea level.

The species has disappeared from 50% of known historic sites, is rare at all remaining sites and is expected to become extinct without intervention.

The main threats to the Spotted Tree Frog are:

This funding is going towards;

Conserving Victoria's threatened species requires a collaborative approach. There are a number of organisations and groups working to protect the Spotted Tree Frog, these include: