The Orange-bellied Parrot (OBP) is a small (45-50g), migratory ground parrot. Their breeding range has declined significantly, and breeding is now only known to occur at Melaleuca in south-west Tasmania. OBPs are bright grassy green on their backs, wings and flanks, with a yellow chest and some blue on their wings and brow. They get their name from their vivid orange patch on their belly. Males and females are slightly different in appearance, with male plumage generally more vivid.

They are one of only three migratory parrot species in the world. They migrate to coastal Victoria and South Australia to spend autumn and winter. Here they usually stay within 3km of the coastline, foraging on coastal saltmarsh vegetation and adjacent weedy pastures. 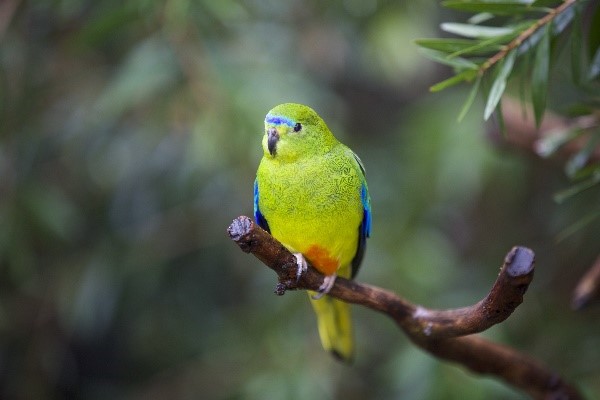 This species is at serious risk of functional extinction in the wild. Functional extinction refers to populations at such low numbers that key ecological processes cannot be maintained. For example, if only one sex remains in the wild, breeding becomes impossible. The National Recovery Team and its partners are working to deliver a range of existing and new management actions that aim to prevent this from occurring. The group is trying to find methods to improve the success of releasing captive-bred birds into the wild, and to improve survival of the birds during migration and over winter.

In recent years, survival of birds over the migration and non-breeding period has dropped, particularly for juveniles trying to make it through their first migration and winter. Non-breeding season survival of captive-bred adults released in the breeding range in spring is also low.

Historically the decline was probably influenced most strongly by habitat loss and degradation in the non-breeding range, and changes to fire management practices in the breeding range. Currently, the population is also subject to the threats associated with very small population size including genetic decline, sex ratio bias, and allee effects.

In the non-breeding range, population monitoring is coordinated across the South Australian and Victorian range, thanks to the South Australian Department of the Environment and Water, DELWP, Nature Glenelg Trust, BirdLife Australia, and Philip Island Nature Park. This work is currently supported by the National Landcare Program and Glenelg Hopkins and Corangamite Catchment Management Authorities.

Captive breeding programs have been successful and there is a national captive insurance population of around 400 birds, spread across multiple institutions and states. In the recent breeding season, this population produced around 200 fledglings, some of which were released to the wild.

In Victoria, efforts to save the species are being further supported by a $200,000 grant through the Victorian Government’s Biodiversity On-Ground Action Icon Species Grants program, which funds targeted actions designed to protect and conserve Victoria’s threatened species.

This funding is supporting the four-year Mainland Release Trial, which is being undertaken as a partnership between DELWP and Zoos Victoria. This trial is seeking to establish whether flocks of Orange-bellied Parrots can be established in suitable mainland habitats during autumn and winter, and whether these flocks provide benefits to birds naturally migrating to Victoria from Tasmania. The project is testing these ideas by releasing flocks of captive-bred parrots at key locations, and observing whether naturally migrating birds join the group, and whether they may achieve improved survival as a result.

Conserving Victoria's threatened species takes a collaborative approach. There are a number of organisations working to help with recovery efforts for the Orange-bellied Parrot. These include: