Taking action to protect nature is urgent and choosing the best action can be complex. Large amounts of information and the multiple needs of many different species must be considered at the same time.

We’ve developed specialised decision support tools that bring together the best information available, to help inform how we prioritise land management actions that protect the future of Victoria’s unique plants, animals, and habitats.

Strategic Management Prospects (SMP) is a spatially explicit tool that shows where and how we can take cost-effective action to make the biggest difference for as many species as possible across Victoria, and guide on-ground management to deliver Biodiversity 2037.

Why cost-effectiveness is key

To achieve the greatest gain for the most species with the resources we have available, we need to invest wisely. By prioritising actions in places where they are most cost-effective, we can do more now to protect and improve biodiversity into the future.

Who can use SMP

SMP can be used by anyone planning actions for biodiversity, whether you are working to control a threat to Victoria’s plants and animals, or helping to manage a threatened species or special place.

How to use SMP 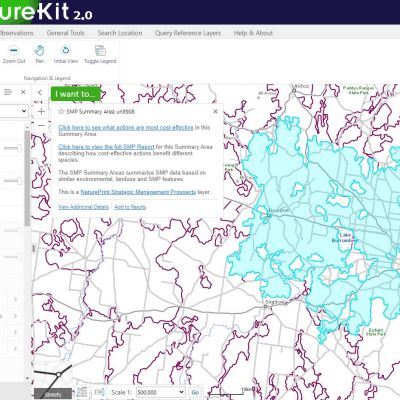 SMP combines evidence-based models for thousands of plant and animal habitats, major threats to their survival, and indicative costs of common, landscape-scale management options across Victoria.

The science of SMP SMP version 3 was released in 2021 and includes:

Victorians have a deep connection to nature and want our biodiversity to be healthy, valued, and actively cared for.

Protecting our biodiversity is a big job. There are many threats. And there's limited time and resources to address them. We know we need to work together to do this.

But how do we know where and how we can have the most impact? Biodiversity is much more complex than any of us can keep in our heads. So we need a big data, science-based approach integrating knowledge from lots of experts.

To help us see where our work can do the most good for the most species, the Victorian government has created a tool called Strategic Management Prospects, or SMP, to help us all make better decisions about protecting biodiversity and to help guide actions across the state.

SMP can be accessed online through NatureKit, one of DELWP's public data platforms.

SMP is flexible. Users can access the map layers and SMP reports to explore combinations of threats, benefits of actions, and cost effectiveness.

SMP is continually being improved with advice from species experts and local land managers. A range of data collected by people working for and observing the environment also contributes to SMP.

You can add your species observations via VBA Go or provide data about your on-ground action using the information on DELWP's activity data web page.

Time and resources to help biodiversity are limited. So we need to work smart.
SMP information helps us make the best decisions for biodiversity for our places, species, and landscapes.

Together, we can make sure Victoria's biodiversity is healthy, valued, and actively cared for.

A Specific Needs Assessment is a structured decision support process for estimating the benefits and cost-effectiveness of a range of management scenarios, including those that differ from the current range of landscape-scale actions in Strategic Management Prospects (SMP).

Specific Needs Assessment is a complementary tool to SMP that can be applied to the management of an individual threatened species, a population or an ecosystem.

The Orange-bellied Parrot Recovery Team used Specific Needs Assessment to compare which strategy we thought was probably our best bet to try and save them from extinction and hopefully see them recover.

So Specific Needs Assessment is a spatial cost-effectiveness tool that DELWP has developed which lets you look at the benefit and cost effectiveness of management actions, or suites of actions in

management scenarios, to look at where you might get the best benefit for your species.

My name is Rachel Pritchard.

I work for DELWP, in the Threatened Species Framework Policy Team.

The Orange-bellied Parrot is a small, migratory ground parrot.

They're a little bigger than a budgie.

They breed in the summer in remote southwest Tasmania and every autumn fly up the west coast of Tasmania to come and spend winter along the coast of South Australia and Victoria before flying south again in spring to return to their breeding grounds.

[Map of southern Australia, showing the annual migration pattern of Orange-bellied Parrots between Tasmania and South Australia and Victoria)

They're critically endangered, and as the population became smaller, they contracted to only

breeding in one location, in a place called Melaleuca.

So the Orange-bellied Parrot was the first species in Australia to have a recovery team, and they started focusing on the species in the early 1980s.

When the numbers of Orange-bellied Parrots in the wild became very low, the species has been really dependent on releasing birds from our large captive breeding program to top up those numbers and prevent extinction in the wild.

The recovery team had to make bold choices about how we were going to respond to that.

new management actions, you're not sure how they're going to go.

Because Specific Needs Assessment allows you to include everybody's voice, and because it allows you to document your uncertainty and move through it, it can be a really important tool to help threatened species managers weigh up complex decisions and alternative strategies and choose a path forward, when otherwise, it might be difficult to choose the next step.

The recovery team used Specific Needs Assessment to compare what we had been doing for the last few years, our status quo, to a range of different alternative strategies, allocating released birds in different ways.

The results of that showed that across the whole recovery team, there was a strong feeling that juvenile release was our most likely beneficial strategy.

People felt even more strongly in support of releasing those really young birds than what they had said in the group discussion and that we should allocate more resources to that.

The recovery team quickly increased the number of birds we were breeding in captivity that year.

So instead of the 35 juveniles for release, we would have 50 available.

This was a bolder decision than we were prepared to make before undertaking Specific Needs Assessment, and it's let us see some really amazing results occur in the field.

This is a species that's been declining for 40 years, and now we have two years of population increase.

In the breeding season following our Specific Needs Assessment, the recovery team released 50 juveniles at the breeding site at the end of summer.

This led to the largest number of birds migrating north than we had seen in over a decade.

And we hoped that that would translate to a larger number of birds returning to the breeding site for the following breeding season.

It was really exciting to see the first increase in birds arriving at the breeding site.

51 Orange-bellied Parrots returned, which was a ten-year high.

And for comparison, in most of the ten years prior to that, we had around 20 or 25 birds returning for breeding.

That led to a really successful breeding season, which broke all the records, including most number of baby Orange-bellied Parrots banded in a single day.

And then we let another 50 juvenile birds go at the end of that breeding season.

This meant that over the last winter, 192 Orange-bellied Parrots flew north on their migration into

their winter grounds, which was a number we probably couldn't have imagined getting to so quickly.

data that was available and the collective best guess of the experts that know this species best.

We were aided using the Specific Needs Assessment that allowed us to identify our uncertainty but move past it to choose the management strategy that we thought was going to work best.

And fortunately, it looks like we've been proven correct.

Learn more about Specific Needs Assessment online, and see how it can help you protect Victoria's biodiversity.

[Text on screen: The Department of Environment, Land, Water & Planning would like to thank: Zoos Victoria, Birdlife Australia, the Department of Natural Resources and Environment Tasmania, the Orange-bellied Parrot Recovery Team and the Mainland Release Team for use of their stills and footage.]

For help or further information get in touch at nature.print@delwp.vic.gov.au.