Monitoring can be done in different ways.

Table 1 lists common monitoring tools available to assist in deer control work. These tools are described in more detail below. This is not an exhaustive list – other tools may exist beyond those described here.

Tracks of deer are easier to detect in the moist ground compared to dry conditions and are more readily observed along streams, water bodies, and game trails.

Deer often move around at night, so using thermal imaging and cameras can lead to better detection than daytime observation alone. Deer may roam over large areas and the frequency of encounters change with density. Deer are more likely to be found near water sources, particularly in dry environments. 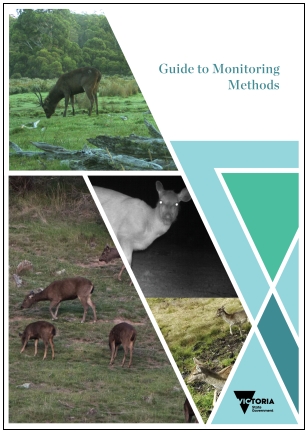 The use of direct observations of deer alone may not provide accurate estimates of density, particularly if daytime sightings are used, because deer can often be hard to see. The initial establishment of deer at a site may go unnoticed until a population builds up.

There are opportunities to increase citizen science, collaborate with groups, schools, and other interested parties. These will contribute data towards improved strategic deer management. Further collaboration should improve data collection, storage and sharing. Community-led initiatives are being explored in parts of the Plan area.

FeralScan is a free resource for landholders, Landcare groups, community groups, local councils, professional pest controllers and biosecurity groups. Deer sightings, damage and control results can be reported either directly on the FeralScan website or through the FeralScan pest mapping mobile app.

Camera trap monitoring is used to estimate the presence and/or total abundance and/or density of deer across the area of interest.

Using trail cameras to record deer presence often results in large amounts of image processing. Every photo needs to be checked for deer compared to other species. Artificial intelligence is being used to process photographs, but it is still an expensive process compared to manual image evaluation.

Cameras should be located systematically (with a random start point) or randomly in available habitats. The total number of camera locations will depend on the size of the monitored area. The rule of thumb is that cameras should be at least 500m apart.

The coordinates of each monitoring site should be recorded using either geographical coordinates (i.e., Latitude/Longitude on GDA94) or projected (planar) coordinates). If coordinates are projected (i.e., Universal Transverse Mercator or UTM), record the projection used. 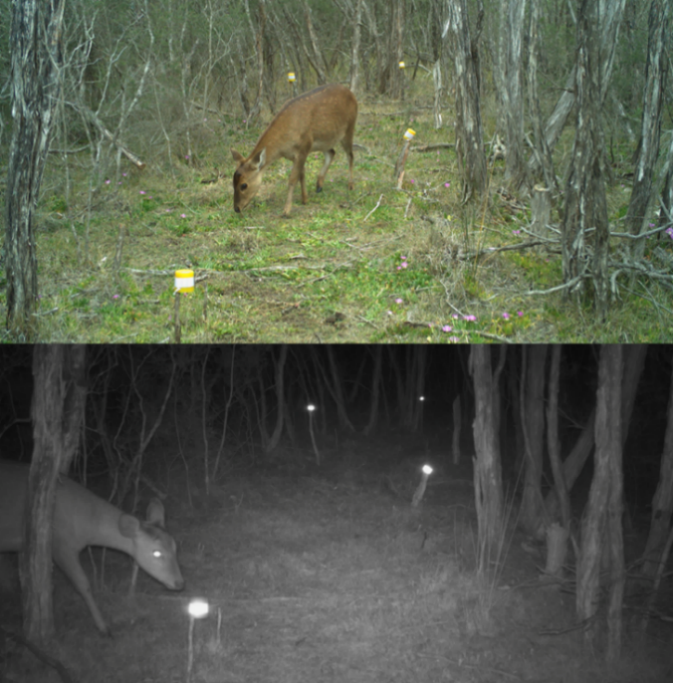 Vegetation monitoring is used to measure vegetation and ground layer attributes responses. Vegetation metrics include (but are not limited to):

Recovery of areas after reduction or removal of deer is important to record. Quantitative and qualitative measures for vegetation are important. Qualitative floristic measures document the actual species comprising a community rather than its physical structure. The simplest floristic description of a vegetation type is simply a list of the species present. Often the species list is accompanied by a measure of the abundance of each species.

Measures of abundance include:

If damage is observed on adjacent land (such as an orchard), record the date of existing damage and subsequent impacts: for example, 25 trees stripped.

Shooting should record the number of hours of effort and animals shot. Also, record animals seen but not shot.

Records should include deer species, gender, and approximate age. If a tissue sample was taken, record the sample number and date taken. If possible, a tracklog of areas worked in an area can provide information for analysis.

Water sampling can help with monitoring the presence and type of deer. Where limited numbers of animals may be present, combining multiple water samples may be applied. The eDNA techniques are best conducted with a robust project design. Seek specialist advice.

Deer dropping pellet counts are used in some locations to determine deer densities. There is some opportunity for community involvement in scat collection.

In some studies, modelling is used to project where higher levels of deer are expected. Melbourne Water is using pellet counts on land they manage.

Aircraft and drones can survey specific areas for the presence and density of deer.

Usually, thermal imagery allows the presence of animals to be determined and classified to estimate deer numbers at the time of the survey. This can help with planning activity such as on-ground control actions. In the Cardinia Local Government Area, a recent activity counted 158 deer using thermal imagery. Deer density is more important than the overall number of deer.

Collecting tissue from shot animals can contribute to genetic or DNA analysis of populations to help identify population connectivity.

Ongoing work at ARI in collaboration with La Trobe University suggests that distinct populations of deer may exist (unpublished).

The distinct populations for Melbourne are shown by different coloured circles, as shown in Figure 2.

This information allows the identification of changes in population boundaries and dispersal dynamics.

Methodology specific to this technique is available from a range of sources and is not intended to repeat that in this document. Figure 2: Population groups of Deer in eastern suburbs of Melbourne to Tonimbuk and eastern Victoria

Figure 3: Population groups of Deer in eastern suburbs of Melbourne to Tonimbuk

Collision data on vehicle accidents with deer can be used to measure the frequency of deer in an area. There is a reported rise in the number of deer hit by vehicles across Victoria. (Davies et al. 2020).